The first assignment for my class "New Interfaces in Musical Expression" was to build an instrument in one week and perform a one-minute performance using it in class.

I based the instrument on a solid steel piece of aircraft surplus I picked up at the Pratt and Whitney Surplus Store. This piece made an appearance in another work of mine, the Fruit Powered Sound Generator. What can I say, its become a favorite. 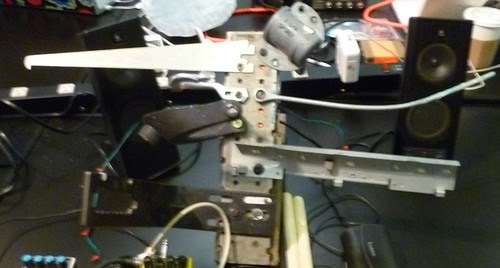 The piece has two rows of machined screw holes. I taped a contact mic to it and just started screwing in parts from my scrap metal bin. After some experimentation, I found that I was able to get a few tonal sounds, and some interesting percussive sounds from the instrument. I hooked the whole thing through a distortion to give it a bit more industrial grit, then a delay pedal set to a long delay time. It was fun to do, and could be interesting in the future because I could swap out parts depending on the type of sound I want.
Posted by Colombo at 10:15 PM No comments: