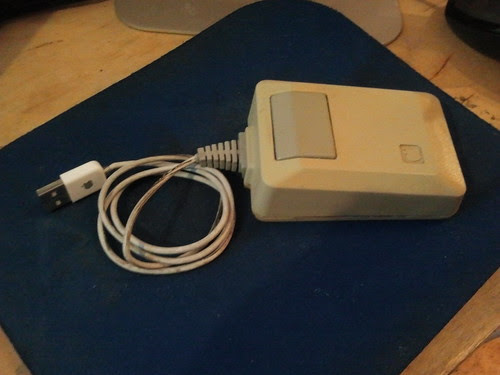 When I was a kid I had one of the first Macintosh computers (you remember, the ones that looked like big cinder blocks.) To this day I love the classic styling of the original mac mouse. I happened to still have one, and recently modded it to accept USB compatible optical components while being virtually indistinguishable from its original design. I'm happy to say it works perfectly, and now I'm the envy of all my local geeks and hipsters. 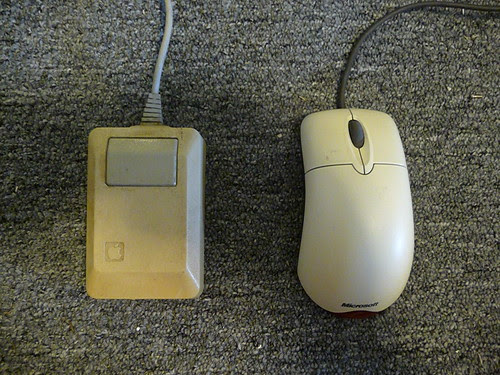 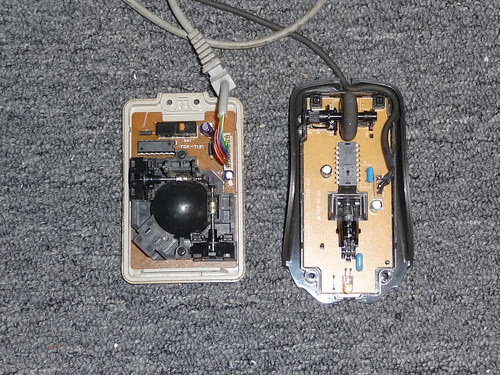 The first attempt at the mod was with this microsoft optical mouse. I had it on hand, and it looked like I could hack it to make it fit. Though in order to do this, I had to saw off the front part of the MS PC Board that contained the buttons and scroll wheel. 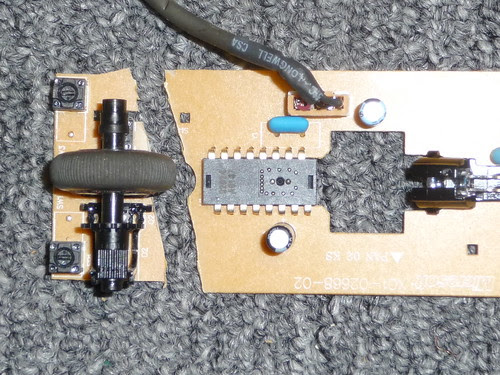 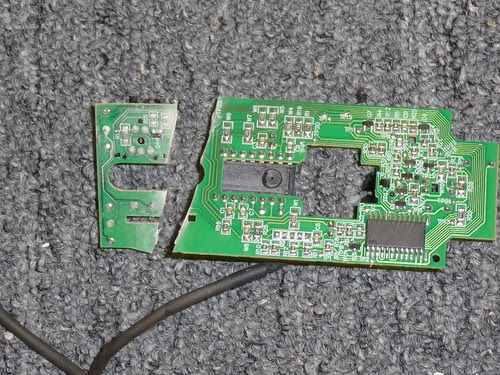 This didn't seem to be a problem at first, because there were no other essential components in the part I was planning on cutting off. Also, I would only be needing one button since I wasn't interested in modifying the external functionality of the mouse (some people have tried this with IMHO hideous results).
I tested the IC with some wire probes, and found which pins controlled the left-click. My plan was to break these out and fabricate a new mount for the button. This would've been fairly labor-intensive, not to mention that because of space constraints, it would put the button smack on top of the IC. 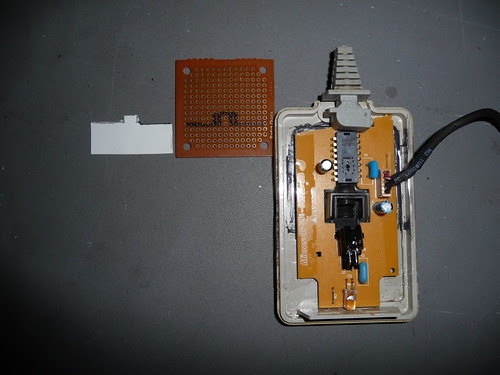 I fiddled around with the configuration and tried drawing up a jig to make it work, but decided to scrap the idea and shelved the project for a while. 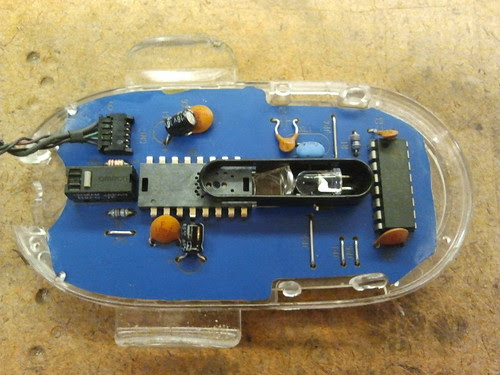 When I decided to come back to it, I tossed the Microsoft mouse and went for a Macintosh ProMouse instead. When I opened it up I could tell right away it was going to be easier. The PCB fit into the vintage mouse with just some minimal trimming, and the click button was mounted smack in the middle. It was even the same make and similar type switch as the old mouse. You could tell these two mice were part of the same lineage. It was actually a bit eerie. 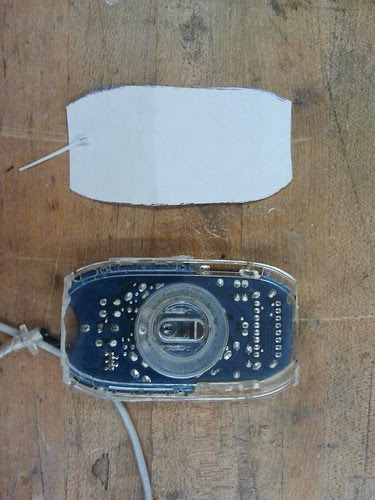 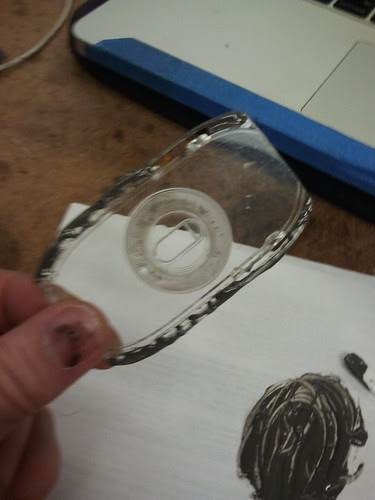 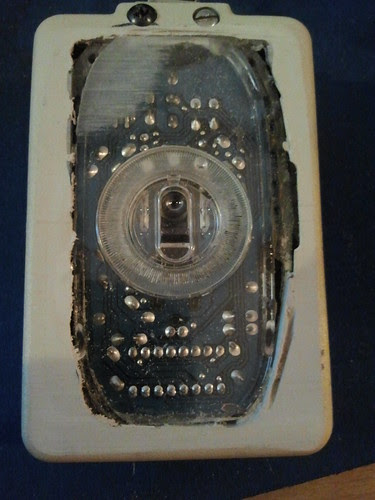 I traced out the footprint of the ProMouse and cut the silhouette out of the vintage mouse with a dremel. I popped it into the spot with epoxy, waited for it to dry, then sanded the whole bottom flush. 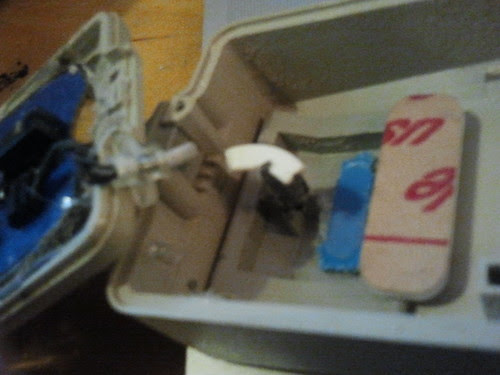 Through trial and error, I mocked up a button assembly that would mate well with the switch on the ProMouse's PCB. Once I found a hot-glue prototype I was happy with, I took it apart and reglued with JB Weld. 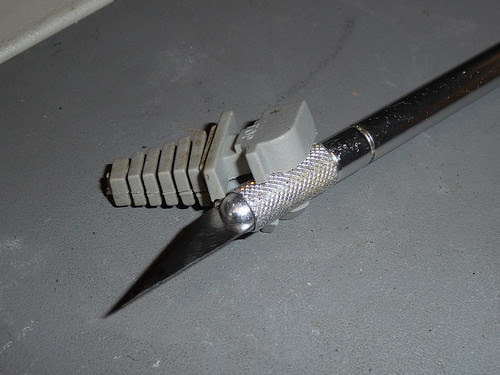 The last step was splicing open the rubber piece the cord fits into. Once done, I hot glued the new USB cord in place.
Posted by Colombo at 7:21 PM 1 comment:

Building a Telepresence Rig at ITP

For the next two months I'll be working at NYU's ITP as shop and equipment room staff. It's a great gig because I can be within my grad school community, and even get some of my own work done when there's not much going on.

But sometimes I'm asked to do an odd project, and the other day I was given a fun task - rig up a telepresence station in an afternoon. We had the camera already to go, so this was a pure construction job.

Full-time staff member Marlon and I slapped together a bunch of speed rail onto a chair, and secured it from beneath by sandwiching some flat plates together.

All in all it was a quick but satisfying build. The 360 degree, remote controlled camera floated at head height in the chair, and the addition of a Domo head made it seem like it was just another day at the office for Bob. 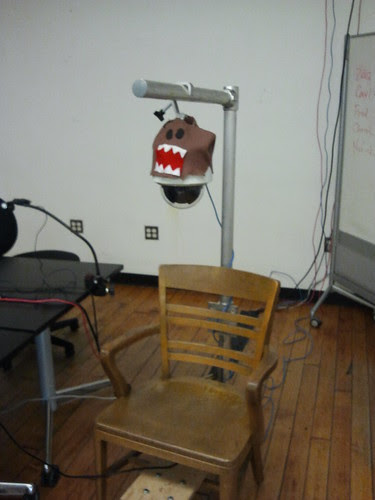 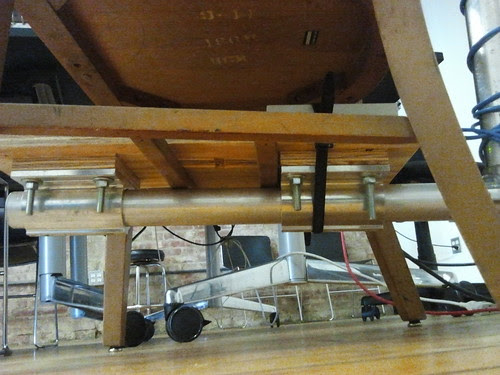 Posted by Colombo at 8:59 PM No comments: