Maker Faire Day 2 - Moonisphere is Too Big to Fail 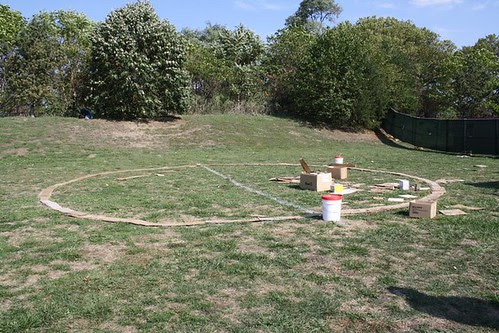 After a sweltering day building the Moonisphere on day one, so far we have merely a Moonicircle, but fear not! We were able to do a lot of prep work in the shade, cutting massive amounts of cardboard into appropriately sized strips to lay down.

Once the framework is made, we'll cut slots with a jigsaw, and fit it all together like an old-fashioned barn raising.

The crew from the New York Hall of Science has been great at redirecting all of their waste cardboard to our pile, and there will be plenty of cardboard from wolphram-alpha swag integrated into the Moonisphere.

If you find yourself passing by our tent, give a hand in constructing a wicked cool piece of temporary art! We're right by the 3d printers at Maker Faire, all day today.
Posted by Colombo at 8:03 AM No comments:

Contrary to popular belief, the moon (at least for one weekend) is not made of cheese... 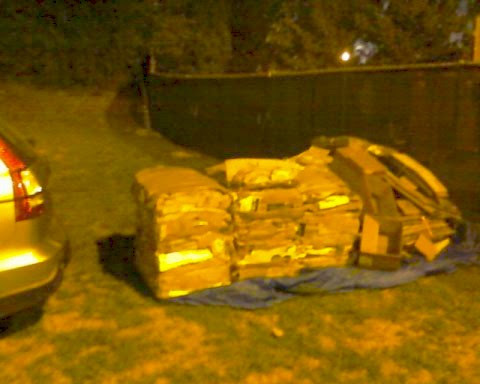 The Moonisphere build begins today at Maker Faire.
Posted by Colombo at 6:58 AM No comments:

At ITP I have already met many kindred spirits, one of whom is Nelson Ramon, a longboarding, computer hacking, Colombian uber-geek. This is a photo of him, doing what he does: 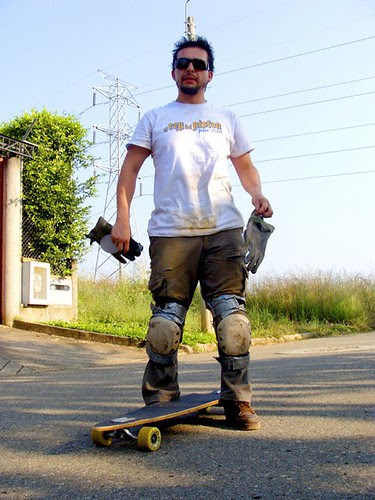 He congratulated me on my recent wedding, and it turns out that he also got hitched just a couple of months ago. So of course, we compared wedding rings. I explained that mine was hand-hammered out of titanium by a local artist and New School professor, Paul DeBlassie. But I knew I had been bested when he showed me his white gold ring, also handmade, but with his anniversary engraved on the inside in binary!!! I definitely lost that geek fight, but am proud to have been there. Congratulations Ramon! 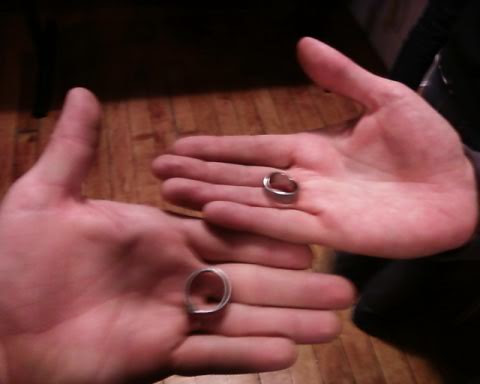 Posted by Colombo at 8:34 AM No comments:

Lots of guitarists collect effects pedals, and lots of effects pedals end up being set aside, never to be seen again in a guitarist's rigs. This invention aims to take advantage of that trend. It consists of a series of effects loops that are cycled through sequentially, with each loop having controls for clean/effected blend, and on/off - each loop can contain one or more effects pedals, the rate at which they cycle through can be varied by a knob, and the overall blend between clean signal and effected signal can also be adjusted.

I really want to make a prototype of this, but do not have the skills to do it. Here's a mock-up. 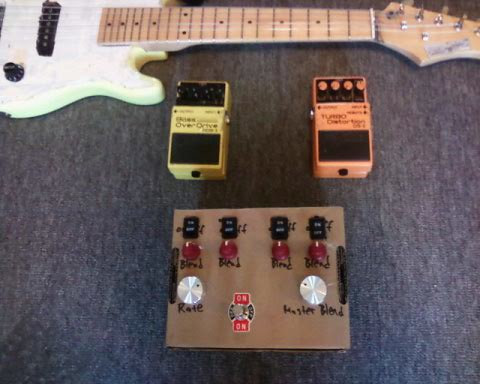 On a Rocketship to WhoKnowsWhere

On September 4th I was married to my lovely gal, Melody - twas an amazing DIY wedding with mismatched dinnerware, handmade papergoods, and an ass-kicking crowdsourced band. Once all the photos and video are in I will dedicate an entire post to it.

I am keeping a project blog of my work at ITP here if any of you are interested.

3 days later, I started grad school at NYU's Interactive Telecommunications Program. My first class was a lecture hosted by the founder of ITP, Red Burns. Our first speaking guest was legendary performance artist Vito Acconci, who spoke right after I found out I was chosen to be in the first group for the following week's presentation, which would be a "reaction" to Vito's talk.

I became intensely close with the members of my group, and over 50 hours of work within one week's time, we conceived and presented this piece: a 40x50 foot sheet of clear plastic was pulled over the entire audience, and text of some of our most personal and controversial opinions were rear-projected onto the sheet. With the screen being wavy and up-close, the audience had to cooperate with each other in order to decipher what was written, and in so doing have a moment in the present with each other. Following this, we asked each audience member to write down a personal/controversial sentence of their own and stick it to the sheet. The sheet was pulled off and onto the stage, where I read several of the audiences' sentences aloud. Then we bunched up the sheet and carried it off stage. Afterwards Red said "this group set the bar very high." I must admit we were unsure whether this would be pulled off, but in the end it worked wonderfully. Pic by Becky Kazansky by and video by Matthew Rader below:

Posted by Colombo at 1:03 PM No comments: